LOOK AT THOSE EGGS

The root cellar needed more dirt pushed up on the outer walls.  This will give it some more insulation and help to keep the inside at a more moderate temperature. Sonny called Robert to see if he could bring over his backhoe and do the job for us.  He came over Friday and in a blink of an eye he had his backhoe unloaded and went to work on building a bank of dirt on three sides of the cellar.   His teenaged son came along to get some OJT from his dad.  While he was observing his fathers skill at maneuvering the backhoe he asked if we wanted any laying hens. 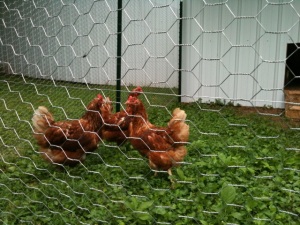 He has about forty chickens and wants to lighten his load a bit.  He said we could have them for three dollars a piece.  He would throw in a rooster too if we wanted one.  We passed on the rooster and said we would take three hens off his hands.  What the heck for nine dollars we get three hens to practice getting eggs from.  Yesterday we came home from town and found a note on the door that said our new chickens were in the pen.  They made themselves right at home in the coop and nice plump hens they are too.  I think they will fit in nicely here at Pot Hole Farm. Especially when they blessed us three beautiful brown eggs this morning.

This entry was posted on Sunday, August 1st, 2010 at 6:15 pm and is filed under Chickens, Farming, Harvesting, Homesteading, Off-Grid, Self-Sufficiency, Solar, Solar-Powered. You can follow any responses to this entry through the RSS 2.0 feed. You can leave a response, or trackback from your own site.

6 Responses to LOOK AT THOSE EGGS