The date on the calendar may say its spring time, but we are already getting prepared for next winter.   Our first year making maple syrup taught us that the evaporator is an insatiable beast when it comes to its favorite fuel. Wood. The furnace consumes the wood logs in the same manner a dog scarfs  a chunk of steak and then looks for more.

We hope to get about ten cords of wood stored and set aside for the evaporator. Our house is heated by a wood stove too, so we will need to cut another three to four cords for it.

There is a stand of trees in our east pasture that we have wanted to clear out, so that is where we have begun our wood harvest. Sonny fell one tree yesterday and then another today. We cut the trunks up into rounds and have temporarily stacked them on the wood racks. Later we will use the log splitter to split them and then replace them in the racks to dry over the summer. They should be ready to use by next winter.

Wood rounds waiting to be split.

The weather is still cool and perfect for wood cutting. Better to get the majority of it done now before the temps rise. Its no fun cutting wood when its sweltering and the last thing you want to think about is fire. Thats homestead life.  You are always preparing for the season ahead.

Thanks to everyone who has already purchased their syrup so far. We have had a few days here where it has been too cold for sap to run so we were able to orders sent out. Now is the time to order. I think we will have another sap run this Saturday.

Well we are still at it around the farm. I was in the sugar shack until nearly 1a.m. last night. Last night it got down to freezing so that will be good for the Maple trees. It is snowing here this morning and I’m not sure when it will warm up again to allow the trees to start the sap flowing again. 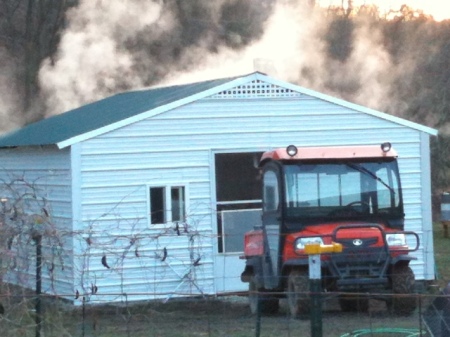 Before the sun went down

We are going to try to head into town this morning. The county has been working on the 6 mile dirt road that we live on for the last 2 weeks. There has been some soft side areas in places and they are working to reenforce the edges to keep if from moving down the hill.

Maple syrup may be the top event going on here at Pot Hole Farm, but its not the only one. We still have daily chores to attend to that include gathering firewood, taking care of the guineas, chickens,  turkeys and cats and dogs. Because we have had few days of sunshine the generator needs to be fed as well and that means going down to the Country Store to fill up gas cans. Gray cloudy days do not make enough energy for the solar panels to charge the batteries.

January is also the month we start to plan for spring projects and one of those projects is the garden. Today we took a trip over to John and Carols where a nice pile of composting donkey manure was waiting behind the barn. John used the bucket of his dependable 1970’s Ford tractor to dump four large scoops of manure into the bed of our old farm truck.

We were almost home when it began to snow. Large fluffy flakes floated on the wind and landed on the frozen ground. We used pitch forks to spread the manure over about a third of the garden while snow flakes swirled around us creating a scene fit for a snow globe.  The manure was black and rich with pink earthworms playing hide and seek in the clumps. It will lay atop the garden for the rest of winter where it will continue to decompose and feed the soil. We still need to get three or four more loads to finish covering the garden.

The snow is continuing to come down and the temperature is dropping. Time to curl up with a cup of coffee and a seed catalog.

She’s not pretty and appears to be as old as Methuselah with her bent and twisted limbs. She is frightening to most when they see her lightening strike scared bark and she could be the star of any horror film with a group of black crows resting upon her craggy branches. The sapling youth of this Sugar Maple is long passed, but the sweet sap of life still courses through her veins.

She’s a hard worker this one, producing the sweetest and largest quantity of sap than any of our other trees. Hopefully the old girl will continue to work for us for many more syrup seasons. She has stood strong for these last hundred or so years, through many a violent storm, but I fear her time is coming. Each year the storms tear a little more of her away.

So think on this the next time you open your bottle of sweet Maple syrup. Remember that a scary ancient tree gave you the best syrup you ever tasted. And we all know that would be Pot Hole Farm Maple syrup. So get your taste buds ready. Its Maple Syrup time. 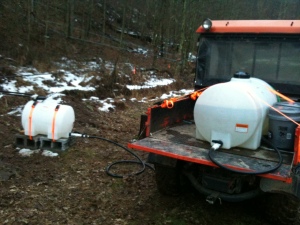 It is kind of a long process but I’m much further along now with getting the new 5/16″ sap lines in place. We had completed replacing the 3/4″ mainline that was laying on the ground and it is all now off the ground nicely secured to the hi-tensile wire.

Now we are about finished connecting the tap lines to the mainlines. I think this will be the main focus around here until we start collecting sap.

We have been trying to take advantage of these spring like days to get as many sap lines run as possible.  Trips to town start early in the day and consist of a running list 0f supplies to be purchased at Lowes and Tractor Supply, then back to the farm. Sonny has been running the 12.5 gauge high tensile strength wire used to hold up the main sap line for a week now.  We later go back and tie the 3/4″ main sap line to the support wire. Once that has been completed we will finally connect up the 5/16″ lateral sap lines or blue lines as we call them. Hopefully we will be finished before freezing weather and the first big snowfall. All that will be left to do is tap the trees when maple syrup season starts in February or March.

We use a spinning jenny wheel to guide the wire as we pull it up and down the hillsides. Otherwise the roll may become tangled and Sonny or I might roll down the hill with a wire slinky tumbling after.

The Spinning Jenny is a great timesaver.

Every few months through out the summer we have purchased additional 35 gallon sap tanks (pigs) that will be placed at the end of each main line to collect the sap each day.  Then we will pump the sap into another tank in the back of the RTV and transport it to the sugar shack. This will be much easier than the bucket method we used last year.

We anticipate that it will take a couple of more years to finish connecting lines to the rest of the Maple trees on our property, but for now we have enough trees to keep you all in syrup.

Well lunch break is over and I need to don boots and work gloves. The Master syrup maker is calling.

Sonny has been working hard to get the sugar shack completed before the maple season starts in February and March. I do believe he eats, sleeps and dreams about maple syrup. That is a good thing for all of you because it means he is passionate about maple syrup and will do his best to produce the best maple syrup in West Virginia. 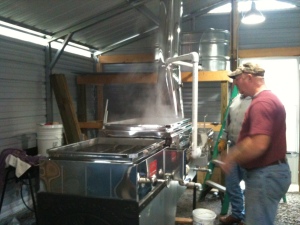 (notice the sap holding tank above the evaporator)

The day was cool and perfect for starting a fire in the wood stove or wood furnace as Sonny calls it, that will heat the sap and boil off the water. We could smell the newness of the wood furnace and evaporator as the metal warmed up. Soon the water began to bubble, creating steam that rolled up from the evaporator like an ethereal smoke. It made its escape to the outside through open vents along the sides and top of the sugar shack. To look at the outside of the building one might think we had a moonshine still working in there.

Firing up the Firebox

We still have a few things to tweak to finish up, but this dry run was a success. Today Sonny is out running lines to the new trees we marked. I will have more on that tomorrow.

I really hope to give you all a play by play of the maple syrup production so you can be a part of the process and when you pour that sweet amber syrup over your pancakes and watch in anticipation as it drizzles down the sides, you will know exactly where it came from and what had to be done to get it.

Last Monday the Sap Evaporator was finally delivered from Leader. I went through Anderson’s Maple Syrup for my order and advice. I purchased the American model because that one fit the amount of taps that I hope to eventually get to.

So far we have only done a fit check and dry assemble. Now we have to rent a wet saw to cut about a dozen fire bricks for the tunnel. Once that is completed the drop flue pan and the syrup pan can be put in place and a simulated sap cook will begin with water.