We awoke this morning to a farm wrapped in a blanket of fluffy snow. Gray tree limbs dressed in white highlights stood out against the darkened woods. Sounds were muffled as walked back to the chicken coop.

The guineas are usually the first to drop from their roosts in the morning, making a daily pilgrimage to our porch railings to beg for breakfast. The turkeys trot close behind them. On the African plains they would be tall giraffes that follow a herd of zebras. Not so this morning. We caught the guineas still lounging up on the pole barn rafters while the turkeys milled below searching for scraps of cracked corn on the ground. 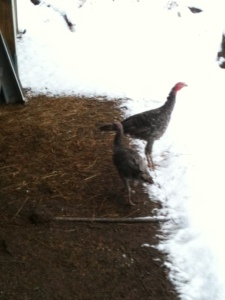 What’s all this white stuff out here? My toes are cold. 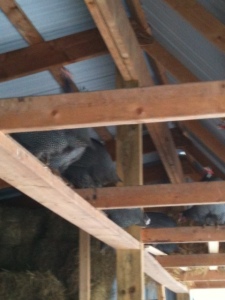 Guineas on the rafters.

The bird netting on the twinny pennies coop yard was blotched in snow and the ground was covered. We shoveled out a path so they could get to their feed station. Of course we couldn’t leave out the chickens from the coop next door and shoveled a path for them as well to the feed station in the pole barn.

Its a day to stay under cover and watch the snowflakes fall. None of the fowl will venture far from their shelters this day, the barn cats are snug in their beds, and Ruby is stretched out by the wood stove. All is quiet…peaceful. Shhhhh. The farm is at rest….for now.

It is kind of a long process but I’m much further along now with getting the new 5/16″ sap lines in place. We had completed replacing the 3/4″ mainline that was laying on the ground and it is all now off the ground nicely secured to the hi-tensile wire.

Now we are about finished connecting the tap lines to the mainlines. I think this will be the main focus around here until we start collecting sap.

During the summer one of my barred rock hens was beaten up by the rooster. She had a few gashes in her head and along her back. I found her by the strawberry patch and thought she may not make it, but she surprised me by stepping in front of me, looking as if to say, “Will you help me?” I nursed her back to health, her comb is now bright red and her feathers are thick. She is completely recovered other than being blind now in one eye. Anytime danger comes her way she runs to me and I will pick her up. Long story short I separated her and her twin sister who is also  disliked by the rooster Captain Jack and put them in their own coop.

When the turkeys came along we tried to put them in with the two henny pennys, but the girls were not happy with their new house guests. Unfortunately it was the only coop with a fence to keep the turkeys confined until they became accustomed to their new surroundings. Since the hens were less than gracious hosts they had to be put back in the main coop until we could build another. Everyday the one eyed henny would stand outside the fence and look wistfully at her old home, wondering why these long legged birds had displaced her.

A few nights ago as evening fell we went to close up the coops and found that the back of the now turkey coop had been opened. The turkeys had escaped and decided to roost on top of the pole barn. We have no idea how the back hatch opened up, but the turkeys have never returned and choose to roost with the guineas or chickens.

Today I put the blind hen back in her home. She strutted around the pen, taking a bite of food and a sip of water before entering the house. She perused the inside with her one good eye then fluffed her feathers as if to say, “this place needs a good cleaning.” Of course I cleaned it for her, scraping and sweeping out the old turkey poop and putting down fresh hay. Later we brought her sister in to keep her company.

Sonny built them a new feeding station with a roof to keep their food dry and clean. I don’t think there could be two happier henny pennys and I’m almost sure I heard a sigh of grateful satisfaction  as we closed the hatch tonight. All is right with the world for these two girls tonight. Content once again in their home sweet home. 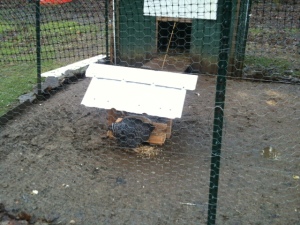