Thursday evening was the opening for the annual Salem Apple Butter Festival. Although apple butter is the focal point of the festival there are also a plethora of food vendors, local craftsman, and raffles.

After a nice dinner at the Cottage Corner Restaurant in Salem, we met John and Carol down at The Depot. We perused the vendors that lined both sides of the street. Food vendors, games, crafts, and local jams, breads, and honey were all on display. Large cast iron kettles filled with bubbling apple butter were stirred in shifts by people using long wooden paddles. It doesn’t take long for ones arms to become tired. Everyone had their own version of the best apple butter in the county.

We came to the booth of The Valley View Apiary and Breads Inc. owned by Mark and Crystal Goodwin. Large round loaves of bread were stacked on the table flanked by plastic bears filled with golden honey.  Mark bakes the bread in a wood fired brick oven that he built himself. Such ingenuity. Of course we all had to buy a loaf and some honey as well to slather on it.

The rest of the evening we were entertained with the talents of the Blue Steel band. Its a fairly new bluegrass and gospel band, but they sound as though they have been together for generations. Great music and talent.

We had a wonderful evening but that is not the gist of this story. The main attraction is that loaf of bread, which I sat on the counter when we came home. Sonny and I thought we might enjoy some for breakfast.

Yesterday morning we went out to feed the chickens and let them out into the pen. My sons dog Dakota is staying for visit again, so she and Ruby were eating their breakfast in the mudroom. Something told me that I should close the baby gate when we went out but I ignored it thinking that we would be back in a short time.

I forgot how long legged Dakota is and how crazy she is about bread. When Sonny and I walked into the kitchen there was our loaf of artisan bread that had been baked in a brick wood fired oven laying on the floor. The plastic wrapper laid there on the floor looking like discarded Christmas present paper. There was only a gnawed on fist sized piece of bread left. I guess artisan bread is more filling than the grocery store bread they have devoured before. 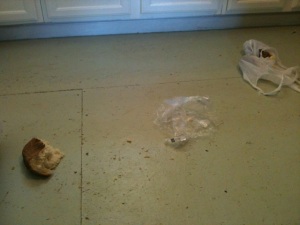 Sonny and I stared dejectedly at the remnants of our bread. It would have tasted soooo goooood with butter and honey spread across its moist surface and accompanied with a steaming cup of coffee.

Since the dogs were so full they couldn’t finish it off, we decided to give the rest to the chickens. They seemed to enjoy our artisan bread that had been baked in a wood fired oven too. Who wouldn’t. It isn’t something you get everyday.

All was not lost though. Lucky for us the Apple Butter Festival is going on all weekend. Yesterday on our way in to Clarksburg, Sonny stopped by Salem and we bought another loaf. This time it was put out of reach on top of the refrigerator. We had some for breakfast this morning. It was well worth waiting for. Nothing like the taste of artisan bread baked in wood fired brick oven. Wish we had one here on the farm. Then again we would be bigger than we are now.

Dakota couldn’t help herself. She has a bread addiction and artisan bread was just way too much temptation. I’m thinking that at some point we may have to have a family intervention. It’s for her own good you know. We may need one ourselves if we had access to bread like that all the time. Evil temptation!

This entry was posted on Saturday, October 8th, 2011 at 11:09 am and is filed under Off-Grid. You can follow any responses to this entry through the RSS 2.0 feed. You can leave a response, or trackback from your own site.

3 Responses to CRAZY ABOUT BREAD