Yesterday evening after the day had cooled down and Sonny and I were caught up on other chores we were able to take time to dig up our potato patch. The potato plants were withered and dry, a perfect indication that the Kennebec potatoes hiding beneath the soil were ready for harvest. Sonny manned the spade fork, pushing it down into the soil and lifting up until those beautiful spuds were forced up from the ground.

He chuckled at me as I hurried to pick up each potato that popped up, squealing like an excited kid grabbing for candy thrown from a parade float. It was a bit like that, but for different reasons. I was so excited to see that our potatoes had turned out in abundance this year and that we had grown food that will help sustain us through the winter. Each one represented a meal.

The first pioneers must have felt much the same, because a good crop meant the difference between life and starvation in winter. A full root cellar is much more comforting than an empty one. What if you didn’t have a grocery store to run to when you ran out of food? I think it is a convenience that we take for granted.

Getting back to the land and being able to care for ourselves is a wonderful feeling. Its gives you a sense of independence and there is a satisfaction in knowing that all your sweat and toil has brought forth something of true value. It is a new life that Sonny and I have embarked on. We have always had to depend on that grocery store to keep us fed until these past few years.

There is a down side of course when your garden is hit with blight, bugs and drought. For all the comfort of a full root cellar is then dashed against the rocks. Thats why our grandparents planned ahead and always canned more than needed in a year, for the next one might not be as plentiful. Thank God for a good harvest this year! We probably harvested close to eighty pounds of potatoes. Today I laid them out on a tarp in the root cellar to cure for a while before putting them back in the baskets. Maybe next year we can build a proper potato bin.

How has your harvest been this year? We would like to hear from some of our fellow farmers or those of you who are member of a CSA or use the farmers markets. How are you preparing your pantry for winter?

Yesterday when Sonny and I went out to take care of morning chores there was a half a loaf of bread sitting on the kitchen counter. When we returned there was an empty torn up bread bag laying on the floor looking as though it had been a tug of war toy. Not one piece of crust or even a crumb was left behind of the bread loaf. They had been completely vacuumed up leaving that area of the kitchen floor looking cleaner than the rest.

Sonny and I eyed the two culprits.

They wagged their tails and panted with a half smile, showing pieces of white bread still stuck between their teeth.

I glared at them while pointing at the shredded bread bag and yelled, “Who did that?!” The panting half smiles were instantly replaced with a look of innocence.

I stared angrily at Ruby asking, “did you do that?” Her big brown doggy eyes looked up at me as if to say “It wasn’t me,” then she glanced over at Dakota, dimeing her out.

Dakota had no defense. Oh yea, she was definitely the one that grabbed the bag from the counter. Her legs are much longer than Ruby’s and the loaf of bread was not near the edge. Paws had to be placed on the lip of the counter and a long neck stretched out before a set of canine teeth could grasp it. The facts are clear on who the thief was, but that does not put Ruby in the clear. I have no doubt there was a lot of coaching from the sidelines. Once the bag hit the floor it was a free for all. No innocent dogs here.

Jugement was set and they were sentenced to the mud room without cookies. Ruby still claims innocence and you can see that she is not happy by her expression in the photo. Bad dogs!

"You got me in trouble", pouts Ruby. "Shut your yap tattle taler," sniffs Dakota. Now we have no cookies.

The other white meat.

We had a good rain today and the temps feel a little cooler, at least the humidity seems to have fallen a few percent. The only problem with rain is that it makes the frat boys pen super muddy, which means the feed trough is full of mud too. I’m not sure, but I think they must be trying to make some kind of mud wine or something cause they like to get in there and stomp the mud until its a slushy liquid. I bet the wild turkeys put them up to it. They probably have a hidden cask of mud wine out there in the woods fermenting and aging right now.

I dreaded going down to the hog pen this morning.  I made sure I put on a set of clothes that were already dirty because I knew what was coming my way. I should have covered myself with a plastic trash bag. Actually I would have been happier if I could have worn one of those white hazmat suits with the helmet and plastic shield.

Of course the boys were excited to see the RTV  and the feed bucket. They were all crowded up at the feed trough doing a tap dance in the mud and seeing how far they could fling it. As expected the trough was full, so I used the little plastic shovel we keep down there to scoop the mud out. The shovel is actually one of those telescoping snow shovels we carry in the car in the winter. It works real well. By the time I was finished scooping, the frat boys had splattered mud on me like a monkey throwing paint on a canvas. The difference is, this was not a pretty masterpiece when they were done. I would have to say though that I fared a little better than Sonny did the other day when it was his turn to go down and feed them. He came back covered from head to foot and I suspect they were trying to make a living mud sculpture out of him.

I don’t think I’m going to add pig farmer to my resume. When these guys are gone I don’t expect to fill the vacant frat house any time soon. I may change my mind when I see the full freezer and that all our work was worth it. Hmmm. Of course Sonny may have other ideas.

This is just the bottom half. It was splattered all the way up my shirt and it didn't smell nice either.

Its the first week of August and we can already see the slight changes in activity that come to light in the late summer on Pot Hole Farm. The birds have quieted somewhat now that their priorities have changed from raising families to boosting their energy levels in preparation for an arduous flight south. The cicadas have geared themselves up, composing raucous concerts that invoke hot humid days and daily thunderstorms. As evening rolls in on thunder clouds the crickets sing of cooler days, good luck and a seat by the hearth. It gives us all hope as we wipe the sweat from our brows and pull our sticky clothing away from our skin.

Everything seems to move in slow motion now like the waves of heat that can be seen rising from hot asphalt, but we must continue on. Winter is on the horizon and there is wood to be cut, fresh garden veggies to be canned or frozen and numerous preparations to be taken care of before snowfall. All our hard work will be worth it when the cold winds howl down through the holler and the farm is covered in a sparkling blanket of snow. There is a great satisfaction in knowing that we can survive the winter.

Last week set us back just a bit as Sonny had to have surgery on his left knee. Everything went well and he is on the road to recovery. 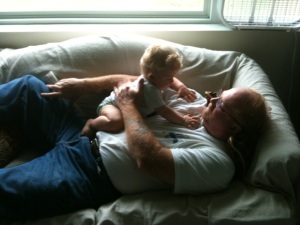 "Does your knee hurt Pop? I love you."

Harold and Clarissa came over for the weekend to drop off their dog Dakota. She will be here for a visit for a few weeks. She and Ruby have been stretched out on the floor napping most of the day making sure that the old adage of “dog days of summer” holds true. 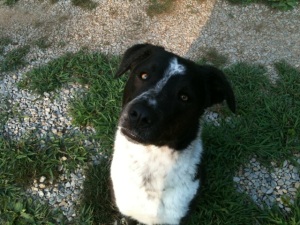 Why can't I chase the guineas? Don't they need to rounded up?

We removed the squash and zucchini plants from the garden. They were beginning to encroach on the lima beans and we have had our fill of them. I canned some squash conserve today and still have to figure out what I’m going to do with the rest of the remaining basket full. We made blackberry syrup the other day and it tasted great on homemade pancakes Sunday morning. The tomatoes are beginning to come on so that means the canner will be at a constant bubble the next few weeks. I believe this weekend we will dig up the potatoes. Harold and Sonny dug up a few over the weekend. Harold needed some to go with the scrumptious breakfast he made for us. How cool is it to go right outside your door and get some fresh ones right out of the ground. They look so much better than the ones we grew last year. Donkey manure does the trick!

The summer heat may scorch us and the humidity may drown us, but the bounty of the harvest will sustain us. We can’t ask for more than that. Life is good.