While hurricane Irene hurled her wrath up the East Coast last weekend, the weather at PHF was beautiful.  We attempted to work on some long overdue projects in between making phone calls to check on family members who were caught in her angry grasp. Prayers were answered and we are relieved that they all fared well.

On Friday John and Sonny worked on step three of building the smoker. It is beginning to take on shape, even though at this stage it looks more like a hunters blind or a kids play house. You are able to see now how the doors will fit across the front and where the grates will sit at the base of the enclosure. 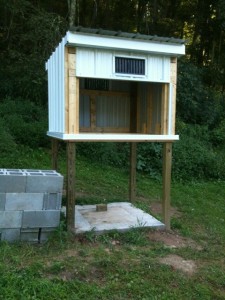 Also on Friday our solar hot water heater and panels were delivered. As of yet we are not sure when we will install it. Sonny plans to place the panels on the mudroom roof. At this point I am not sure how it will all work. That is a blog for him to write. The delivery service unloaded everything right there on the driveway. Sonny used the Kubota to move it over near the woodshed. He drove the Kubota and I held onto the box to keep it from banging into the tractor and possibly doing some damage to the panels. They are pretty tough though. It appears the Kubota tractor has come through for us again. I don’t know what we would do without it. It has become such a staple here on PHF. 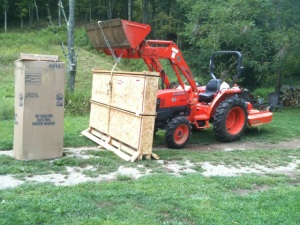 Sonny and Harold have begun to bush hog the pasture that sits on the right side of our property. Its the same area as the infamous tree that got caught in the crook of another. Harold obtained some good experience using the bush hog and I believe is now an expert. They didn’t get it finished, but it is amazing to see how much bigger the pasture is than we had imagined. They still have to remove a few tree logs before finishing.

I haven’t complained much on the blog about how the shower Sonny and I installed in the bathroom has been a thorn in my side. All I can say is that it has been a real festering wound for me. Here’s a little advice for all of you that are planning to install a new shower. Do not purchase one that has umptine pieces and parts that have to be sealed together and get one that has a sturdy base. Ours leaked continuously and we were unable to successfully troubleshoot the area that the water was oozing out from.

Well our son and his wife came to Mama’s rescue and have offered to help us put in a new one. We have picked a fiberglass style that is much sturdier than what we had put in originally. We wanted one that was all one piece, but had to settle for one that is two pieces so that we can get it through the door. Harold is also going to install Roma Stone flooring like he installed in his house in Texas before they sold it. Thank goodness he has experience.

Saturday Sonny and Harold removed the old shower and flooring while Clarissa and I went to pick up feed. They had it completely gutted by the time we returned home. The floor was wet under the vinyl flooring and we finally found where the leak was coming from. It was coming from the area of the drain pipe. Now, this is another reason to get a shower with a sturdy base. I think the shower base we had was flexing when we stood on it allowing water to leak underneath. I have had fans blowing on the floor to dry it out before the men start to work on it this weekend.

Sunday and yesterday were down days for me as I had a little intestinal virus. I was able to lay on the couch all day (between bathroom visits) and watch episodes of my current favorite show that Sonny orders from Net Flicks. I figured rest was the best remedy. Today I feel pretty good and have started to can up the bazillion organic carrots that my bargain hunter daughter-in-law brought me. Thats ok this winter we will be glad to have them and I have no doubt in my mind that we will have some jars left for next winter. We have not been successful at growing carrots in our own garden. 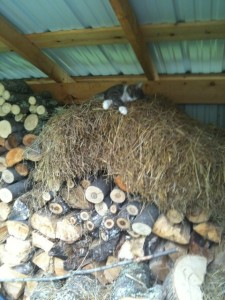 Must be a sick day for Moby too. Oh wait, I think thats just a lazy kitty.

Sunday Sonny was able to go to Two Lynne’s farm and help them put up hay. He got some OJT on running the square baler and fixing it. No, he didn’t break it. It’s pretty common for the strings that tie the bales together to break or become jammed. A lot of these balers are well used but still have a lot life left in them. He enjoyed having a chance to get some baler experience and help our neighbors at the same time. Between my cousin John and Carol and Two Lynne’s Farm we might become decent homesteaders. Hopefully someday we will be able to pass on our experience to someone else. That’s how it works.

This coming weekend will be the Labor Day weekend. Here at PHF  we will definitely be laboring. So much to do…such little time. Life is good!

This entry was posted on Tuesday, August 30th, 2011 at 8:37 pm and is filed under Alternative Energy, Canning, Cats, Farming, Green, Guineas, Homesteading, Off-Grid, Self-Sufficiency, Solar, Solar-Powered, Sustainability. You can follow any responses to this entry through the RSS 2.0 feed. You can leave a response, or trackback from your own site.

9 Responses to LEARNING FROM EXPERIENCE