Our friend Gary asked if we would like to come by and pick some of his yellow corn from his garden. His family had picked just about all they needed and he still had a few rows left that needed to be picked before the corn turned too tough. Of course we took him up on his offer. We didn’t plant any corn this year, and it would be great to have some to can up for the winter. John and Carol has kept us supplied with corn on the cob for our dinner table. I believe they grew silver queen which is a white corn and my favorite.

The Sunday morning sky looked pretty clear as we left out of the door, but as soon as we got down the road and turned the corner black clouds loomed above us. By the time we got to Gary’s house the sky opened up and dumped buckets of  rain. Thunder rolled and lightening cracked. We sat on the porch and talked for a while waiting for the storm to pass. It took an hour or more for the weather to calm and thats when Gary and I with feed in sacks in hand walked to the garden. 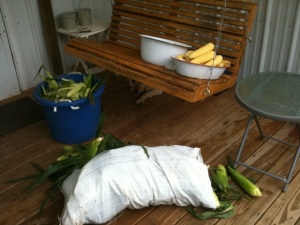 I started canning the corn Sunday afternoon and have been canning ever since. I finished up the last batch today and ended up with 22 pints total. They’ll look nice on the root cellar shelves and taste even better on a cold night this winter. 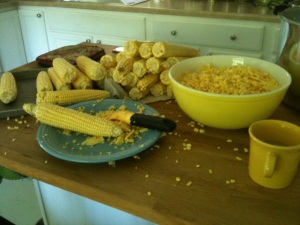 Scraping the corn kernels from the cob.

Note: While I was working on the corn today I felt a very slight tremor. The table vibrated and I heard the tinkling sound of glass near the back of the house. I thought to myself that it couldn’t be the washing machine vibrating because it wasn’t running. I thought maybe it was one of the gas companies drilling across the mountain. That just didn’t seem right, it felt too much like the earth quake tremors I had felt before in Japan and Guam.  I thought I was crazy until my daughter-in-law called and said an earthquake had hit the east coast near Washington D.C. Guess who was in D.C. today? Yea, my husband. Images of the recent Japan earthquake and tsunamis immediately came to mind when he was there on business and not knowing if he would be able to get out of the country. I was able to worry about Sonny again, not to mention all our family members who live in Delaware. Thankfully everyone was ok. Now we just have to worry about the hurricane headed their way. Anybody have some rope so I can hog tie that man and keep him home?

This entry was posted on Tuesday, August 23rd, 2011 at 9:37 pm and is filed under Off-Grid. You can follow any responses to this entry through the RSS 2.0 feed. You can leave a response, or trackback from your own site.