Sonny and I were up until after 11pm on Friday night making cheese. Earlier in the day we had stopped over at Two Lynne’s Farm to get a little ojt on cheese making. They were kind of enough to allow us to borrow the ingredients and utensils needed to make a round of colby cheese. The cheese press Sonny had ordered on line had already arrived in the mail and we were excited to try it out. 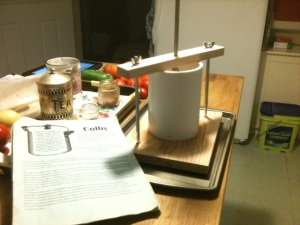 We started the cheese making process sometime after six in the evening. The key word here is process. There are various steps involved in which the milk must reach and maintain a specific temperature. Once the cheese is placed in the press it is left with twenty pounds of pressure for 12 hours, then it is flipped and pressed for another 12 hours at twenty pounds pressure. This morning we removed the cheese from the press and it must air dry for several days.

After air drying we will then dip it in wax. It will then have to cure for about three to four months being turned every week until it reaches maturity. So in about four months we will let you know how it turned out. Hopefully we did everything right and it has a recognizable taste.

Most people know colby as an orange cheese but all cheese is white until a coloring is added. I see no reason to add color and it will taste just the same. Who knows maybe we’ll tackle some cheddar next time.

This entry was posted on Sunday, August 21st, 2011 at 6:40 pm and is filed under Off-Grid. You can follow any responses to this entry through the RSS 2.0 feed. You can leave a response, or trackback from your own site.