We had a good rain today and the temps feel a little cooler, at least the humidity seems to have fallen a few percent. The only problem with rain is that it makes the frat boys pen super muddy, which means the feed trough is full of mud too. I’m not sure, but I think they must be trying to make some kind of mud wine or something cause they like to get in there and stomp the mud until its a slushy liquid. I bet the wild turkeys put them up to it. They probably have a hidden cask of mud wine out there in the woods fermenting and aging right now.

I dreaded going down to the hog pen this morning.  I made sure I put on a set of clothes that were already dirty because I knew what was coming my way. I should have covered myself with a plastic trash bag. Actually I would have been happier if I could have worn one of those white hazmat suits with the helmet and plastic shield.

Of course the boys were excited to see the RTV  and the feed bucket. They were all crowded up at the feed trough doing a tap dance in the mud and seeing how far they could fling it. As expected the trough was full, so I used the little plastic shovel we keep down there to scoop the mud out. The shovel is actually one of those telescoping snow shovels we carry in the car in the winter. It works real well. By the time I was finished scooping, the frat boys had splattered mud on me like a monkey throwing paint on a canvas. The difference is, this was not a pretty masterpiece when they were done. I would have to say though that I fared a little better than Sonny did the other day when it was his turn to go down and feed them. He came back covered from head to foot and I suspect they were trying to make a living mud sculpture out of him.

I don’t think I’m going to add pig farmer to my resume. When these guys are gone I don’t expect to fill the vacant frat house any time soon. I may change my mind when I see the full freezer and that all our work was worth it. Hmmm. Of course Sonny may have other ideas. 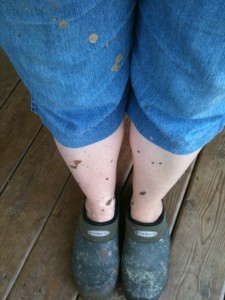 This is just the bottom half. It was splattered all the way up my shirt and it didn't smell nice either.

This entry was posted on Tuesday, August 9th, 2011 at 8:23 pm and is filed under Off-Grid. You can follow any responses to this entry through the RSS 2.0 feed. You can leave a response, or trackback from your own site.