Since I didn’t make my usual trip to town on Monday, I decided to go today.  I thought with the hot temps it might be nice to meander around the air conditioned stores and have a late lunch so I didn’t have to heat the house up by cooking. My plan was to feed the pigs, the cats and the dog, release the chickens, and get on the road.

As usual, I drove the RTV to the first stop of the day at the garage to fill the feed bucket.  Standing there with the scoop in my hand ready to shovel it into the corn, I heard a profusion of gut wrenching, high pitched squeals coming from the direction of the  pig pen. I immediately knew it was not the squeals of anticipation of the food goddess and the magic bucket that rains golden kernels corn into the trough.

I threw the bucket of corn into the bed of RTV and high tailed it back to the pig pen. I saw three of the frat boys dancing around the trough and knew that idiot number four was stuck behind a post like the last one was a few months ago. The only difference is that this time it was on the opposite side of the hooch where they don’t normally sleep. We never thought they would do the same stupid thing again.

My mind was racing and my heart was pounding. Sonny was off to work and I could only hope that John and Carol were available to help me. I jumped into the RTV and zoomed back to the house to make the call. I anxiously stood there listening to the phone ring on the other end, trying to calculate how I was going to get this pig out by myself and praying that Carol would answer. Thank goodness she picked up.  A half an hour later she and John arrived.

Wearing cover alls and a vinyl camouflaged jacket as protection from the mud John ventured into the frat house and removed the brace that the pig was pinned behind. Frat boy number four scurried out of the hooch, none the worse for wear except for a few bruises, and headed straight for the food trough. Thanks to John we have avoided another potential disaster.

Yahoo finally came back on line yesterday evening and Clarissa was able to email the picture of Harold and Sonny on the Kubota tractor gearing up to cut the tree that fell in the crook of another tree. I swear I could hear the echo of Captain Ahab yelling “Man the chainsaws! Heave to!” Well, it is a crusty old Navy Warrant Officer up in that bucket.  That’s sea jargon he could understand. So here it is. 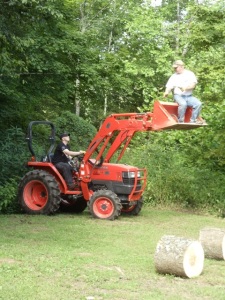 Harold sweating bullets as his father says, "A little higher."

This entry was posted on Wednesday, July 20th, 2011 at 8:47 pm and is filed under Off-Grid. You can follow any responses to this entry through the RSS 2.0 feed. You can leave a response, or trackback from your own site.