Happy fourth of July to everyone. Hope your holiday was an enjoyable one filled with parades and fireworks and stomachs full to bursting from family BBQs. Its been a busy two weeks around here and the blog has been thrown to the wayside again, but I’ll update you on all the goins on around here. 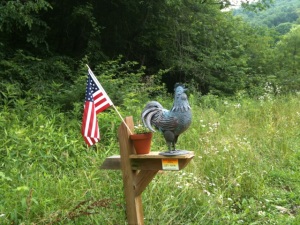 Soon there will be a Pot Hole Farm sign hanging under the rooster.

We spent a great week with my parents and another with my sister. So much has happened that my head is in a whirlwind, but I’ll try to give you a few highlights. 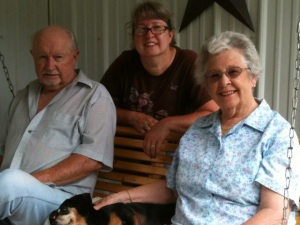 Mom and Dad and I

My sister brought her dog Holly along on her vacation. Notice, she likes to vacation at PHF. Holly is a seven month old Border Collie/Lab mix that is just chock full of energy. Her attention span is comparable to a gnat, but she’s a real sweetie. Ruby started her on farm dog training the moment the pads of her feet stepped onto PHF soil. She had lessons in not chasing the chickens and guineas, barking at odd sounds and intruders, swimming in the creek 101 and the proper way to play tug of war. There were adventures in the woods and trails of wild animals to sniff out not to mention lots and lots of wrestling. Slobbery neck fur was all the rage. 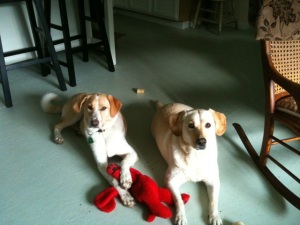 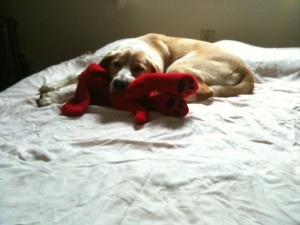 Its a tough job being a farm dog.

Needless to say that like any child, Holly was worn completely out and was the first to crawl into bed every night. Thankfully she didn’t have any nightmares about the frat boys. There first introduction was a scary one.

Of course Holly followed all of us down to the frat boys crib at feeding time. She looked at them and they looked at her. She sniffed the air, then immediately turned around, tail tucked, back hair raised, and sped back to the house like she was on fire. Sounds of whimpering echoed down the pasture. I didn’t notice, but I’m pretty sure her eyes were bugged out with the whites showing. I wish we would have had a video camera. I don’t think I’ve ever seen a dog run that fast. I take it she doesn’t think the pigs are cute either.

We have done a lot of berry picking over the past few days. My sister and I canned up twelve jelly jars of black raspberry jam while she was here and I just canned up eight more today. The garden is starting to produce squash, zucchini and cucumbers now. I’ve canned up about nine quarts of squash. They will be good in casseroles and stews this winter. I would like to try my hand at making some squash soup sometime too. 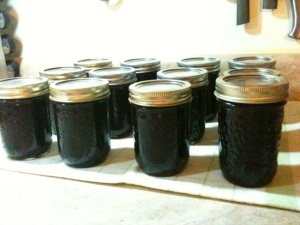 The guineas are growing by leaps and bounds. It was finally time to move them from the small box in my bathroom to a larger own coop of their own. I had a screen across the top of the box to keep them from escaping. Every time I removed it to clean or feed them it turned into a scene from Alfred Hitchcock’s movie the birds.

Sonny used the Kubota tractor to move the old guinea coop from the front yard to over by the fenced chicken pen. The top of the fenced pen is open so we put up bird netting. It isn’t pretty, but it will do the job. Even at four or five weeks old these guineas are able to fly higher the the four foot fencing. We are still wondering when the magic ugly stick will appear to paint their heads red white and blue. Right now they still have cute fuzzy brown striped noggins. 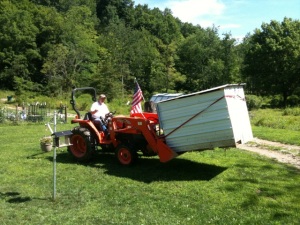 The frat boys are growing too. Besides getting big ol hams on their behinds their eyes are getting more squinty and their snouts bigger. Feeding time was becoming a shoving match because they had outgrown their feed bin so John built a nice long wood trough to replace it. Sonny and I fed them this morning and watched them as they still pushed and shoved each other. There is more than enough space for them to get in and eat. I think they are just like any other brothers and prefer to make every meal into a fighting match.

John was also nice enough to come over yesterday to help Sonny finally finish the addition on the back of the wood shed. Sonny had started it just before he injured his shoulder. Any type of reaching up is still painful. The doctor said he tore a muscle and would need surgery to repair it, but he can wait until later this fall to have it done. He will have quite a few months of re-coop time.

Yesterday was hot and humid and you could break a sweat just walking to the spigot to get a drink of water. The heat made Sonny and John’s work even harder but they completed the job. It’s nice to have another project finally finished.

There is always work to be done around a farm, but we still had time to have a little fun these past few weeks and enjoy time with family. Now we are looking forward to a visit from my son and his family now that they live a few hours away. Thats it for now. I’ll try to be more diligent in keeping up the blog, but sometimes my day ends too quickly and so does my brain energy. Life is good!

This entry was posted on Monday, July 4th, 2011 at 8:56 pm and is filed under Off-Grid. You can follow any responses to this entry through the RSS 2.0 feed. You can leave a response, or trackback from your own site.