I don’t know if the shirt and dog hair scared off the bear last night or if he just didn’t come by, but all was intact this morning. The piglets can already recognize the RTV. They race up to the fence with raised snouts sniffing the air for edible scents, their squinty eyes alight with curiosity and anticipation. I guess they can’t control their excitement when they see the bright orange cantina of pig delicacies rolling up to the pen.

My second stop of the morning was to let the chickens out and check on the guineas. The guineas are usually way out in one of pastures but I noticed that I only had three walking around the yard close to house. I remembered that last night when I came home from John and Carols there were only three hovering around the feed bowl. I didn’t think anything of it at the time as sometimes one or two will already be roosting. It is one of the females that is missing. I’m not sure if something got her while I was gone yesterday afternoon or if she has decided to nest somewhere.

I walked around the farm looking for anything that might indicate she was nesting and kept watch to see if one of the males or the group would cluster around an area. The guineas as well as the chickens acted a little odd today. The guineas didn’t venture off to parts unknown like usual but spent most of their time on the porch railing. The chickens stayed close too mostly in the yard between the house and woodshed. They didn’t even out near the garden. It was rainy and overcast but that has never stopped them from making their rounds of the farm. Even Moby stayed close choosing to nap in a box on the porch instead of hunting.

I would like to think that the little female guinea is somewhere out there sitting on eggs, nestled behind a curtain of tall grass and brush, but I fear she may have been the dinner of a hawk or fox maybe even a coyote. Who knows. We’ll still keep watch though. She may turn up eventually.

The little chicks were the only brave ones today as they ventured further from the coop than they ever have. They came out as far the yard in front of the wood shed.

Looks like a good place for bugs to hide.

Roo Roo Rooster kept an eye on them but didn’t bother them. He is already becoming protective of them. He will be a good husband when the time comes. He takes good care of his other five wives. 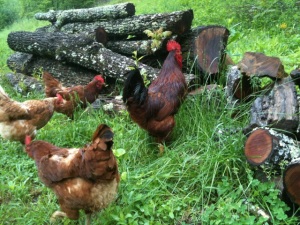 Come on girls. Looks like some good eatin' over here.

This entry was posted on Tuesday, May 17th, 2011 at 9:16 pm and is filed under Off-Grid. You can follow any responses to this entry through the RSS 2.0 feed. You can leave a response, or trackback from your own site.

3 Responses to MISSING A GUINEA