We got up before the roosters this morning to go to our usual Saturday flea market. John and Carol followed us out in Whitie ( their flat bed truck ). The sun was just starting to rise over the mountain tops.  You know the old saying, the early chicken gets the first bugs.  Sorry, thats my version.  I think the original was something about a bird, but it really doesn’t matter. 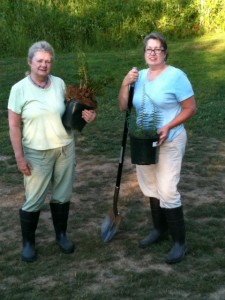 In any case the early riser gets the best deals.  Its usually worth missing that second cup of coffee, but barely.

We ended up having to park the cars in the back forty because apparently there are people who skipped the first cup of coffee and got there before us. We started down the rows checking out vendors when my eyes caught sight of a table at the end of the row. Chickens. Beautiful white Leghorns and Rhode Island Reds. There were a few squawking ducks and a couple of pairs of doves, but I ignored them. My eyes looked like kaleidoscopes as I moved closer.  The vendor saw the glint of a sale in my eyes and threw out the hook by saying “five dollars a piece.” 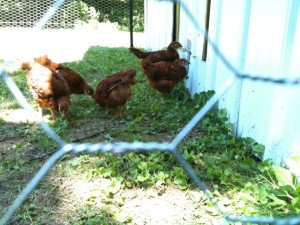 I put my game face on. He wasn’t going to get me that easily. How old are they I asked?  He respond with  “A year.”  We were really looking for some pullets. He pulled out a wooden crate containing five Rhode Island Reds. Two bucks a piece.  The chickens looked healthy and  a crowd was beginning to form. He loaded them up in a box for me and off we went.  So now I am the proud parent of five pullets.

The chicken house is finished except for a few finishing touches, but the girls don’t seem to mind. They checked it out and appear to be comfortable.  The only thing we had to do was put up a fence.  Since we already had the materials, Sonny, my sister and I knocked it out in about two hours.  It was fun watching the girls strut around the pen pecking anything that moved and stretching their wings.  They look right at home. The only nightmare we might have is if we made a mistake and ended up with five roosters. To be continued….. 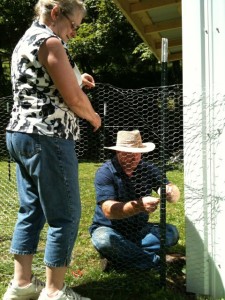 Janice helping with the fence

This entry was posted on Saturday, July 3rd, 2010 at 8:22 pm and is filed under Off-Grid. You can follow any responses to this entry through the RSS 2.0 feed. You can leave a response, or trackback from your own site.