The sun was shining early this morning when the Green Goblin turned into my driveway.  I wasn’t sure if Ronald would come by to build the wood shed since the weather man predicted rain and thunderstorms through out the day.  I guess he figured he might as well get something done between raindrops.

Blair didn’t come with Ronald and Vicki today.  He had to take his dog to the Veterinarian for it’s yearly checkup.  I tried to fill in as best as I could being a “tote”.  A “tote” is below a “go for”.  You help the “go for” carry boards, and ladders, of which you are always trailing on the back end.  You hold up boards to be nailed when the “go for” can’t handle it themselves.  When two ladders are in use you must control one making sure it is ready and in it’s proper position as the boss needs it. 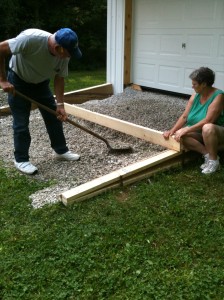 The first order of the day was to finish the foundation of the garage ramp.  A few weeks ago we had shoveled in the gravel.  Today Ronald put in the side foundations to hold in the concrete when it is poured in the garage and the ramp.  We had to make sure that the gravel was four inches below the the top of the foundation ascending up the ramp.  There was too much gravel so we had to shovel some out and then rake it until it was level.  Now the garage is ready to have the concrete poured.  That will happen a couple of weeks from now.

Thunder rumbled far off in the distance.  We moved to the wood shed project to get as much done as possible before the weather changed.  The sun was still shining but the air was thick with humidity and we were wet with sweat. 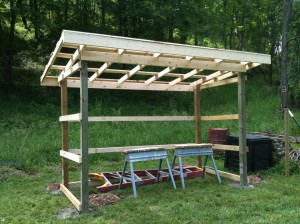 Ronald dug the four corner post holes.  He hit a few rocks but none that were so big they couldn’t be removed.  Then he put the 4x4x10 corner posts into the holes and poured in the sacrete. It needed to set up so we took a break and tried to cool off on the porch.

The thunder got closer and the rain came.  It lasted about a half hour and moved on.  The sun popped out and the air was more humid than before, but we trudged on.  Things seemed to move pretty quickly as we put on the side boards, fascia and rafters. It helps that Ronald has a nail gun and has probably built a hundred of these structures in his lifetime.  More than likely we will use this same pattern to build shelters for our goats when we get them.

The last thing Ronald did was to measure the coop and wood shed for the metal.  If he orders it tomorrow it should come in on Monday.  Hopefully by Tuesday afternoon our coop and wood shed will be ready for use.  All in all it was a productive day.  I am a little worried that Ronald may never be the same after working with two women who are opposed to being bossed all day.

This entry was posted on Thursday, June 3rd, 2010 at 7:33 pm and is filed under Barn, Farming, Off-Grid, Self-Sufficiency, Solar, Solar-Powered, Sustainability. You can follow any responses to this entry through the RSS 2.0 feed. You can leave a response, or trackback from your own site.

6 Responses to THE WOOD SHED